When one adopts a pony over the Internet, sight unseen, during the holidays, from 1,500+ miles away just after moving to her own horse property is it an "impulse" adoption or just divine destiny?

This is the question of the age when pondering how a small, 13.2hh POA came to live at Prairie Corner Farm in March of 2007, and have an awesome, fun-filled and well-cared for last five years of his life until finally succumbing to cancer on a beautiful, sun-filled spring morning in 2012.

Laura (me) had just found the Columbia Basin Equine Rescue in early 2006 and was often driven to tears at the stories of horses who had ended up in that rescue partner's feedlot, spent time getting fattened up until eventually, having not found a legitimate home, found themselves packed tightly into 18-wheeler shipping trucks bound for slaughter (and slaughtered) in Canada.


All judgments of morals about that business and the in-bed nature of the rescue with it aside for now, it was inevitable that something along the line would catch my eye, especially after Michael admonished me several times: "Please stop looking at that web site! It makes you so sad."

One day in November, I was making my weekly review of the site when I found this:

20+, 13.2h, appy gelding pony. This is a super great pony!!!!!! Easy to catch, easy to handle, good about his teeth being looked at, ears touched, feet picked up..... Easy to ride, moves off leg, gives to rein pressure, neck reins and backs easily. We were told he is trained to drive as well but we do not know as we have not seen it for ourselves. None-the-less, this pony is great, great, great! He could possible have an eye problem as seen here in the photos he is squinting but he could see and navigate fine around the other horses and the feed-lot. 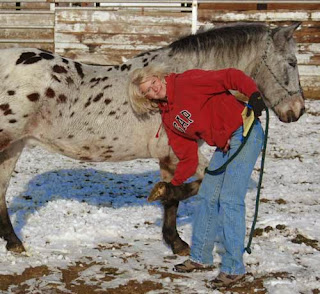 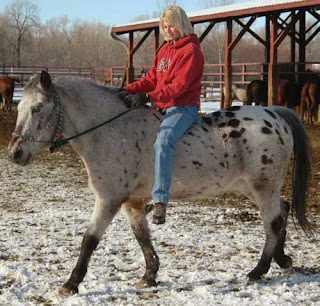 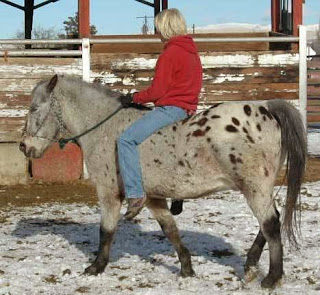 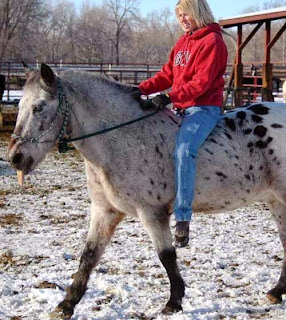 uh oh. one problem. The pony had spots. This was surely a show-stopping moment as my rationalization hamster started turning.

I checked the web site daily, sometimes 2-3 times day. Ok, well, maybe every hour. Finally my hamster went right over the edge: "I have to have that pony. It's the holidays. Merry Christmas to me" and I clicked the "Adopt" button then transferred $325 from my checking account to CBER via PayPal. "There", I sighed, "It's done. I feel better now!!"

I arrived home after work that day, humming to myself and smiling. Michael noticed my change of demeanor and asked cautiously "Do we own a small spotted pony now?" LOL ! I should have learned a long time ago: Can't put nothin' over on that man.

That night, the pony was picked up and taken to a safe place, where he was cared for and quarantined due to becoming sick and needing a vet, a farrier, a chiropractor and on and on and on ... naturally the adoption fee for the pony was just the beginning of the warming up of the checkbook.

Kane named the pony "Junior" from afar and we sent several care packages including wormer, money, treats, a blanket, a halter/head and more. We also donated a few things and some money to CBER. I have heard many bad things about Sam M and CBER over the years since then but at the time I received weekly photos, calls, emails and status updates on Junior from December 2006 until March 2007 when it was finally time for Junior to come home.

Photos sent by Sam while he was in the care of CBER in Yakima, WA: 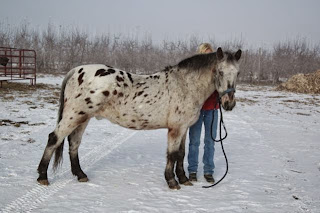 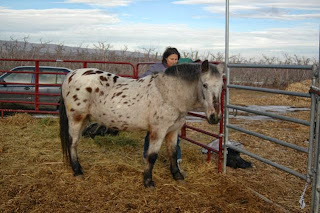 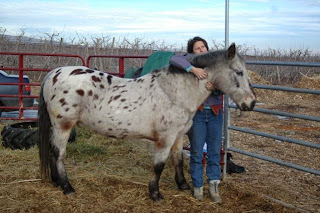 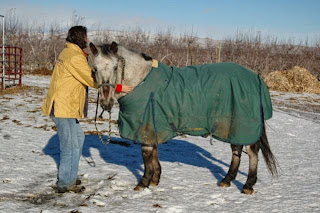 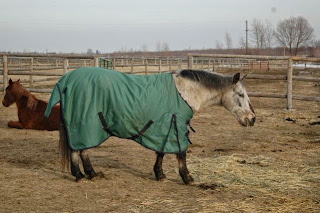 Finally after the payment of $1,700 up front to a transport company found online, four days of traveling from Washington state to Illinois, and 17+ phone calls between me and the driver during transit - Junior was home.

He arrived at midnight when he was expected at noon the following day, but we were so happy to have him. There is of course much, much more to the story and many subsequent stories of his life with us here (which we will tell someday), but for now we will leave you with these initial photos of Junior's arrival as part of our family in the Spring of 2007.